Man with palsy lowered to Christ by James Tissot on Christimages.org.

Is there anyone among us who has never sought healing for themselves or for loved ones? The pain and suffering that often accompany health issues are common to all people. Healing was one of the major signs that Jesus was the Messiah who was prophesied throughout the Old Testament. Throughout His ministry, Jesus healed physical defects, illness, injury and demon possession wherever He went. Matthew 9:36 describes Jesus’ heart towards people:

“But when He saw the multitudes, He was moved with compassion for them, because they were weary (harassed) and scattered, like sheep having no shepherd.” (NKJV)

Health issues that cause pain and suffering may be a part of life in this fallen world, but this verse makes it clear that this is not what God wants for us. He hurts right along with us and cares deeply about our well-being. Jesus’ healing ministry also made it clear that God is indeed powerful enough to heal any infirmity and even raise the dead.

So why doesn’t God just waive His mighty hand and wipe away all sickness from this world? I would love to be healed and live forever here without pain or suffering, but this world is still fallen. The thought of living indefinitely in this world reminds me of the movie “Death Becomes Her” in which two vain women drank a magic potion that gave them eternal life. The problem was that even though they could not die, they could definitely get dinged up over the years.

This brings us to two points to consider: first of all, if we belong to Jesus then this world is definitely not our home, but rather our current assignment. We need to understand that when we do get to our Heavenly home, we will be healed and will get to live forever without dings!

The second point to remember is that every single person who Jesus healed when He walked the earth eventually died. If we spend our existence focused on our own physical needs rather than sharing the hope of Jesus’ eternal healing with others who are hurting, we short change ourselves and may even deny others the opportunity of eternal life through Jesus. Focusing outwards may bring us to a place in which our infirmities are eclipsed by our compassion for the spiritual needs of others.

Lisa Nordell-Detres is a mother of four, grandma to three boys, a pastor’s wife and has worked in the garment and customer service industries in southern California. Besides writing, Lisa enjoys cooking, sewing, organic gardening, hiking, skiing and doing most anything outside. Lisa is a member of the Central Oregon Writers Guild.

Hope for the Future

As we finish reading the book of Ezekiel, the story takes a sharp turn starting with chapter 40. God takes Ezekiel on a vision ride to the future Israel and shows him in detail how the devastated city of Jerusalem and the Temple will one day be rebuilt.

Ezekiel suffered greatly during his years of service, even having to go through the death of his wife without being allowed to grieve for the sake of being God’s messenger to his country. Because of his faithfulness to God, he was given a detailed tour of the new and improved Jerusalem and Israel, right down to the exact measurements of the Temple and the carved cherubim and palm trees that decorated the interior.

Then God gives Ezekiel the plans for the division of the nation of Israel by tribes with the tour ending with a walled city with twelve gates, each named after one of the twelve tribes of Israel. The book ends with the name of this city: Jehovah-shammah, or THE LORD IS THERE.

God allows us to go through difficult times in our lives, but He promises us that we will never go through those times alone, He is always with us. Ezekiel knew this and lived out his life in obedience to God. What a blessing it is to have such beautiful examples of faithfulness!

Reading the description of the new Kingdom reminded me of another glimpse of our future in Heaven as depicted in Revelation 21-22:5. I love reading this because it gives us all a picture of the beautiful glory that awaits all of Jesus’ faithful followers. It brings hope and encouragement to those who are suffering and comfort to those who are on their death beds. God never leaves us without hope; better things are to come!

Lisa Nordell-Detres is a mother of four, grandma to three boys, a pastor’s wife and has worked in the garment and customer service industries in southern California. Besides writing, Lisa enjoys cooking, sewing, organic gardening, hiking, skiing and doing most anything outside. Lisa is a member of the Central Oregon Writers Guild.

You Are Going to Die! 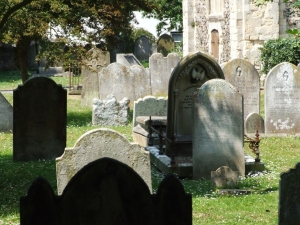 This news does not set well with most people, but King Hezekiah’s response was especially passionate. “Then Hezekiah turned his face toward the (Western) wall and prayed to the LORD, and said, ‘Remember now, O LORD, I pray, how I have walked before you in truth and with a loyal heart, and have done what is good in Your sight.’ And Hezekiah wept bitterly.” (Isaiah 38:2-3, NKJV) Not only did God hear his prayer and heal the King, He told him that Hezekiah would live fifteen more years. God even gave Hezekiah a miraculous sign of His promise by turning back time ten degrees on the sundial of Ahaz. I don’t know how much time ten degrees on the sundial of Ahaz was, but it must have been substantial.

I suspect that many people have prayed similar prayers when given that bad news, but God is sovereign and He can do whatever He wants, including healing or choosing not to heal the terminally ill and raising the dead. This does not mean that those who have been healed don’t die at some point in the future; nobody gets out of this life alive.

Had he died when Isaiah first told him he would die, Hezekiah would have passed peacefully, leaving his kingdom intact. As it was, over the period of the next 15 years, Hezekiah’s head swelled and he made the foolish decision to show the entire treasury to a group of visiting Babylonian emissaries. God rebuked Hezekiah and told him that everything he had shown to the Babylonians would be carried off to Babylon, along with some of his family members. (2 Kings 20:12-18)

Hezekiah also fathered Manasseh during that 15 year remission. Manasseh ascended the throne at the age of 12 after Hezekiah’s death and was recorded as the most evil king of Judah, committing atrocities beyond those practiced by the people who had lived in Canaan before the Children of Israel settled there!

We can never know what might have happened had the story ended differently, but what we do need to grasp is the concept that we are eternal beings who, if we are saved by the precious blood of Jesus, will live forever in heaven. Our eternal life is already upon us; all that separates us from eternity are these earthly bodies that are one step closer to death each day. Rather than being obsessed with cheating death and extraordinarily extending our lives here, we need to focus on the task that Jesus gave us to do and then when our time is up, take that last step into the arms of our loving Savior.

Lisa Nordell-Detres is a mother of four, grandma to two boys with a third on the way (!), a pastor’s wife and has worked in the garment and customer service industries in southern California. Besides writing, Lisa enjoys cooking, sewing, organic gardening, hiking, skiing and doing most anything outside.